The season of morning mist is coming along with the cold air. The fog by radiative cooling rises around Lake Kinrin, filling up the basin so by the time people wake up, the area is just like the bottom of a misty lake. There are many basins in Oita, and foggy mornings are seen in various places, like Hita and Ajimu to name a few. Among which, the thick fog of Yufuin (Yufuin, Yufu) is well known, and the scene is almost like a fantasy.
As I walk along in the fog, it reminds me of Nobuo Tsumura’s poem “Hina no Uta” (“Song of Countryside”). One of the verses reads, “A girl in the mist was dipping some water, and flowers in the crimson color blooming in the garden of the farmhouse. The girl was picking the flower, as her body and heart were lightly dampened.” It was 1928 when Tsumura spent a month in Yufuin for his medical treatment. The dampened may have been the poet himself. Roughly 80 years since then, Yufuin now… is still in the midst of fog.
Going back even further, the basin used to be an actual lake. The goddess of Mount Yufu, Unagi-hime was thinking while looking down on the lake. “If all the water in the lake is dried up, the people would be able to use the fertile land at the bottom.” Soon she ordered her giant to kick and break a part of the surrounding mountains. At last the water started flowing out and created the Oita River, leaving only the Lake Kinrin for the master of the lake, Ryujin.
Unagi in Japanese also reads as Unagu. It means to hang something on the neck. The goddess with a necklace of some sort. Doesn’t that ring a bell? Himiko wearing a necklace made of Magatama and mirrors. Was Unagi-hime the leader of the ancient Yufu nation? Now the goddess is enshrined in the basin as the name of a shrine, and the giant is celebrated atop the mountain where he broke, as Kesaki Gongen.
The fog is dense. On a morning of deepening autumn, a traveler overlooks the misty lake from the Oita Expressway, on Trans Kyushu Road. At the bottom of the fog, he will find many tourists as well as the villagers… Nobuo further adds, “My thought is deeper than the morning mist of mountains with hot spring.” 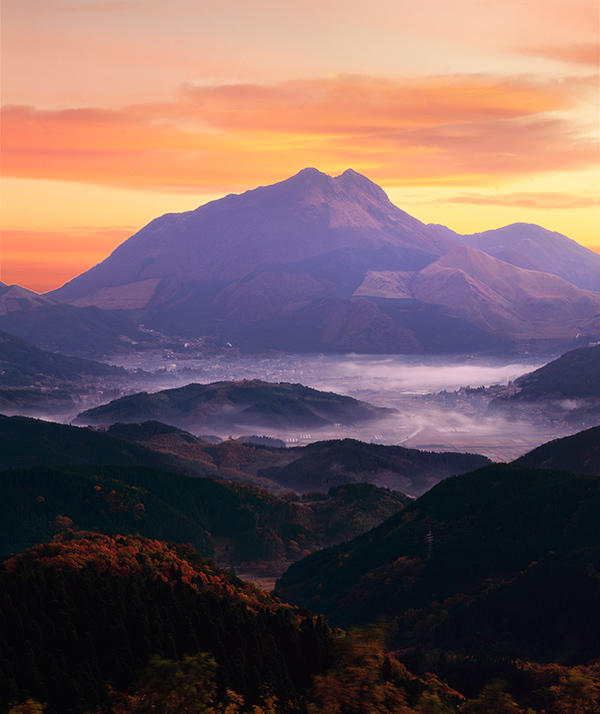 Mount Yufu in the morning mist.