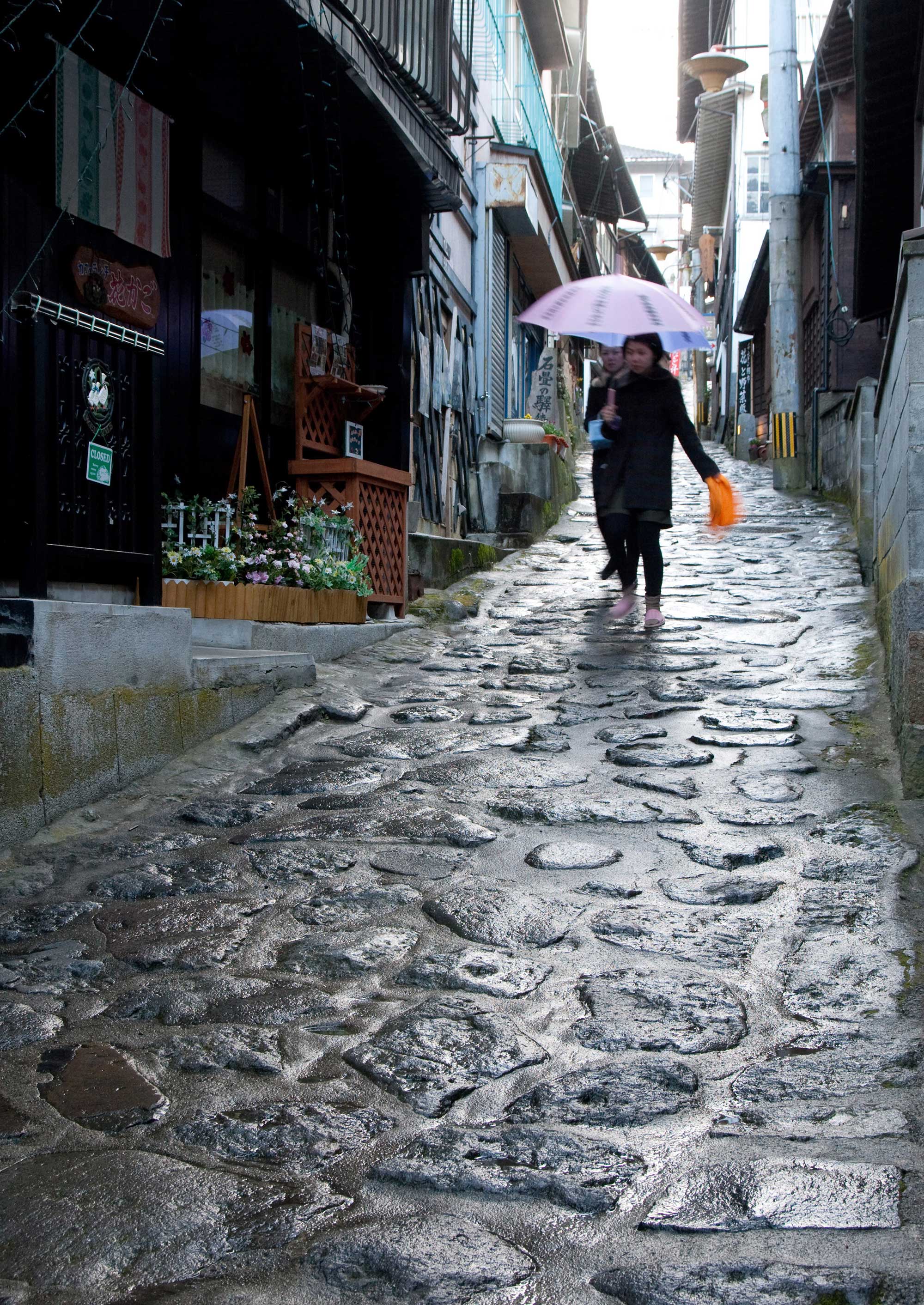 The Cobblestone Slopes in the Yunohira Onsen

Stone-paved path is symbolic of Yunohira Onsen. The gentle slope spreads about 500 meters. Both sides of the path are filled with hot spring inns and souvenir shops. There are five public bathhouses such as Kin-no-yu, Gin-no-yu and Naka-no-yu. The clip-clop sound, made from the geta sandals worn by customers coming for hot spring therapy, is heard along with the gentle stream sound of Kagono River. The rain goes quite well with the scene.
Terraced rice fields spread just above the hot spring district, and continue to the lush green hills and woods. Yuhou Kikuchi composed a poem about this, saying “The sound of water is rising in the misty ravine, in the rainy Yunohira.” Ujou Noguchi hummed, “In Yunohira, I feel the gentle smell of the hot spring on my skin returning home from hot spring therapy.” Santouka Taneda was touched by the warm water and hearts of people. “In the winter rain, people have been so kind. My eyes are filled with tears.” There is “Santouka Museum Shigurekan” to commemorate the poet.
The history of hot spring goes way back. According to a legend, it originated when people found monkeys in the hot spring during the Kamakura period, and is said that hot spring therapy bathhouses opened during the Muromachi period. Into the modern era, the place has been bustling with visitors as Kyushu’s second most popular hot spring resort, next to Beppu.
However, it seems there were some tough times during the Edo period. It was the unique cobblestone slope that revitalized the area and led the hot spring therapy bathhouses to their prosperity. Sansuke Kudou, known as the benefactor of irrigation by developing Otatsui-ro waterway was involved, and stones were paved on the road during the Kyouho era, about 300 years ago. Since then, the city has revived and attracted visitors again.
JR Kyudai Line initially started as the “O-Yu Line,” connecting Oita to Yunohira. This also tells you how attractive Yunohira Onsen was to people back then. When it merged with Yufuin Onsen, the character “Yu” was kept as in the town of Yufuin (current City of Yufu).
This type of spring is weakly saline. “Great to drink as well as taking a bath in,” the spring is especially known for its gastrointestinal effect, where some inns serve the hot spring water instead of tea.
Nowadays, they are actively working on bringing back the greatest time, trying to modernize the place while keeping the good old atmosphere. Starting from the “Cobblestone Romance” path, the younger people are taking steady steps. 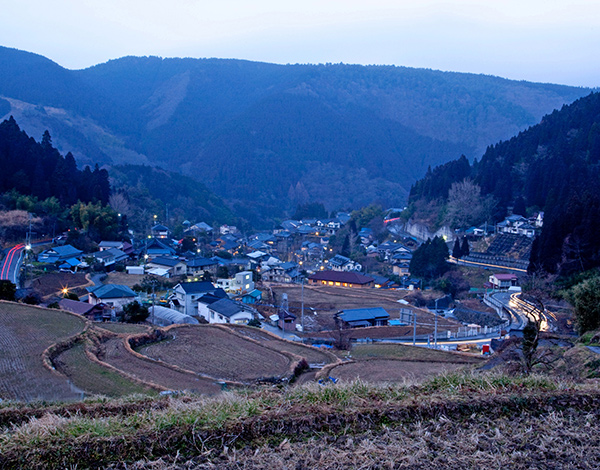 The terraced rice fields just above the hot spring resort, going onto the lush green hills and woods.