There are ruins of war all over Oita Prefecture, which speak of the horrors of war and human suffering, but many of these have been left to rot. But among these, the number of ruins designated as cultural properties which people will try to pass on to future generations has increased. The efforts taken by the City of Usa are a good example.
Built as an airfield in Biden in the Usa Plains, Usa Imperial Japanese Navy Air Service was established in 1939. In the beginning, it was used mainly to train for the deployment of crew on carrier-borne attack aircraft and bombers to combat units, but when the Pacific War began two years later, it was incorporated as an operation unit, and became a base for special attack units, or the “kamikaze.” Many young people flying out of here lost their lives. For this reason, a series of violent air raids by U.S. aircraft starting in the spring of 1945 destroyed not only the Air Service facilities but the surrounding towns and villages, leading to the deaths of not only soldiers but many civilians as well.
After the war, the Air Service site, including the airfield, was demolished, and nearly disappeared under subsequent large-scale field establishment, but restoration work on maps by city offices and scholars have gone forward and the conservation of the few remaining ruins has been planned.
Among these are bunker ruins. There are nearly ten of these concrete facilities, used to protect aircraft from airstrikes, scattered here and there. Representative of these is the municipally-designated historical site, Shiroi No. 1 Bunker. 5.4 meters high, 22 meters wide, and 14.5 meters deep, this relatively small bunker was used to conceal the Zero Fighter. There are other, large bunkers more than 40 meters wide.
Shiroi No.1 has been excavated as part of the conservation project, and a monument stands in the park-like surrounding area. On the nearby ruins of the runway stands stone pillars, representing the soldiers once sent off the suicide squads.
In addition to these ruins, there are buildings in the central part of the unit riddled with bullet holes, an air-raid shelter, and “Bomb Pond” created from the blast of an aerial bomb. 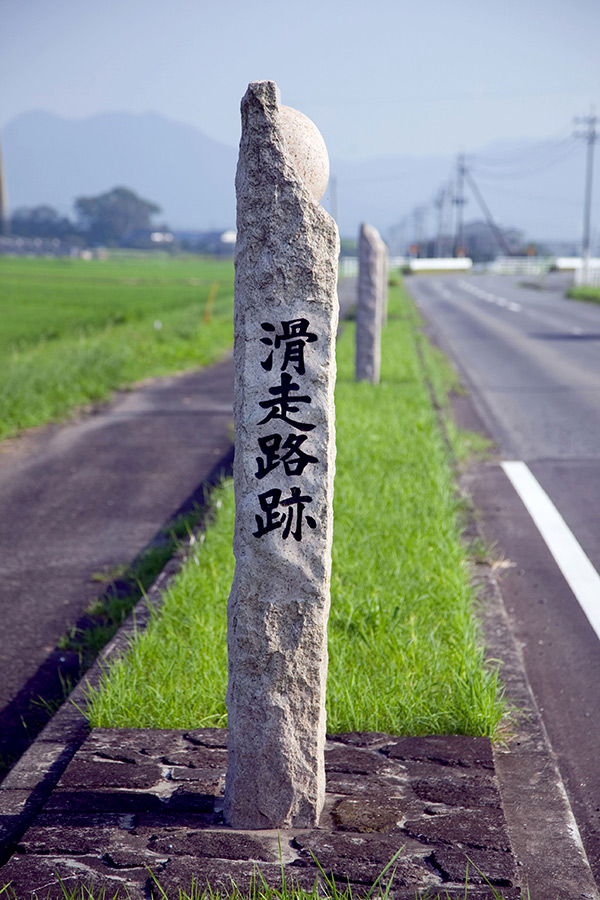 Stone pillars standing on the ruins of the nearby runway.