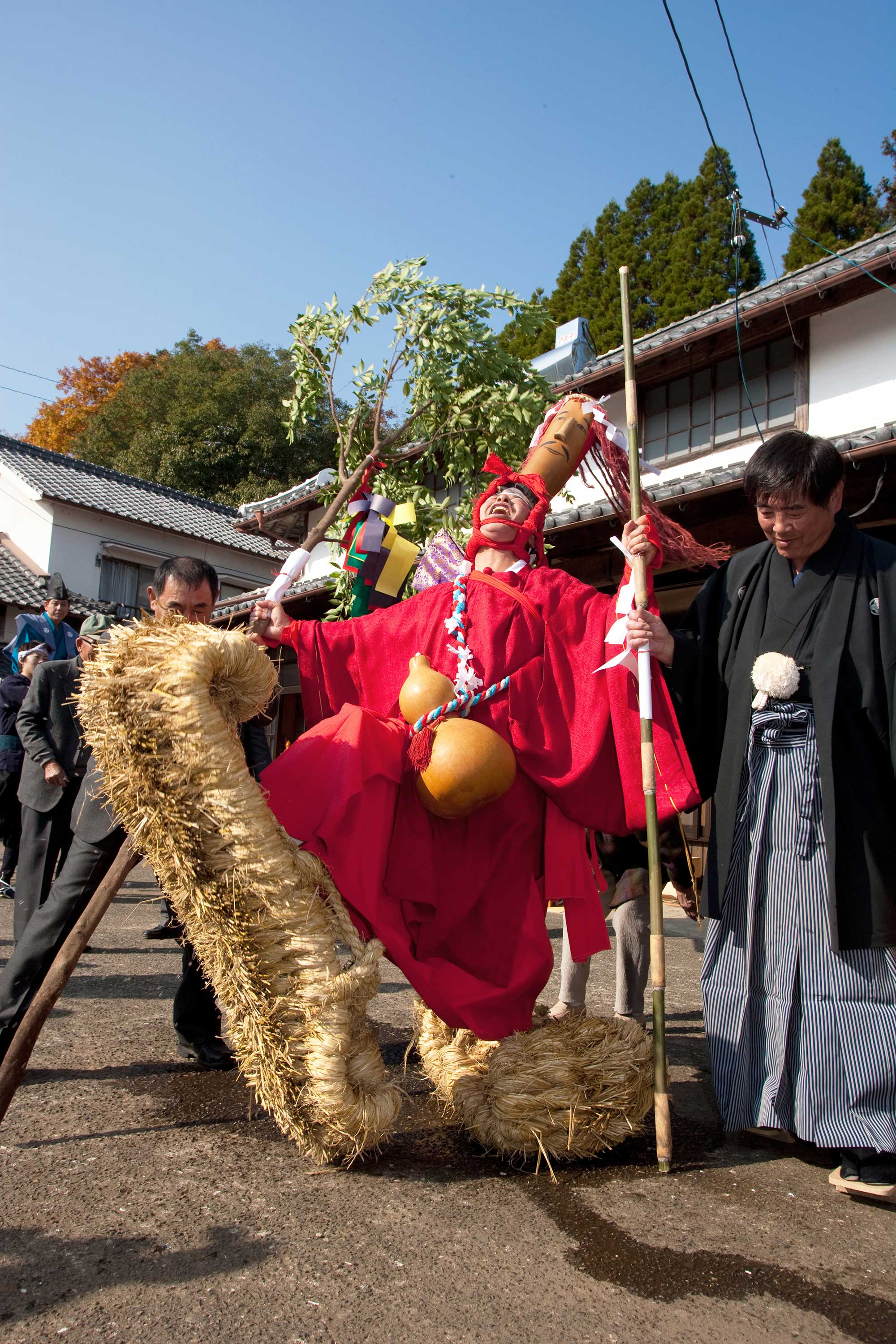 ”Heave ho,” “Heave ho,” “Hyotan-sama is on his way!” – Shimotsuki Festival of Shibayama Hachiman Shrine (Chitosemachi, Bungo Ono) is generally known as “Hyotan Festival.” At the festival, a group of people dressed as old samurai goes out to the village, led by “Hyotan-sama” (Sir Gourd).
His appearance is quite bizarre, with a gourd of about 80 centimeters in length on top of his head, and a sword on his back in a flamboyant costume. He also wears a huge pair of waraji (Japanese traditional sandals), which are 1.2 meters long and weigh about 8kg. He has a cane made of turf but cannot walk by himself, so there are assistants on both sides.
He serves the sacred sake, more than 5 liters filled in the gourd hanging on his neck, to people watching on the roadside. The sacred sake is believed to provide great health and luck, therefore everyone in the audience competes to get a sip.
The procession to follow is composed of a bushi warrior on horseback with two horse keepers, a spear carrier, a mikoshi (a portable shrine), and more. After all, it is a leisurely parade which takes two hours to travel one kilometer, so everyone has to take it easy. It’s tough for both humans and horses.
According to legend, the festival started towards the end of the 12th century (Kenkyu period). The festival is hosted by an organization called zagumi, whose responsibility comes in turns among the people in the community. Hyotan-sama is also selected from the community each year, and it is believed that whoever becomes the Hyotan-sama gets good luck. But it really is a lot of work. You can barely walk, let alone make it look effortless, and you have to drink the sacred sake served back to you by people on the roadside, making you even more tipsy. Eventually you will be pulled by a rope attached to the waraji sandals.
By the way, Shibayama Hachiman Shrine enshrines the divided spirit of Usa Jingu Shrine, and there is a sign made in 1450 that says “Bungo Province, Amabe County.” Amabe is written differently from what it is currently known as. As the legend of the snake girl in Chinda Falls upstream is related to Saganoseki, the shrine could have belonged to Amabe County. This appears to be related to the complex history of governance over the land of Chitose area. The topography of Ono River bank terrace around the Hachiman Shrine is just gorgeous. As you look down from National Route 326 on the other side of the river, you will enjoy the magnificent plain landscape layering up several times along the river. 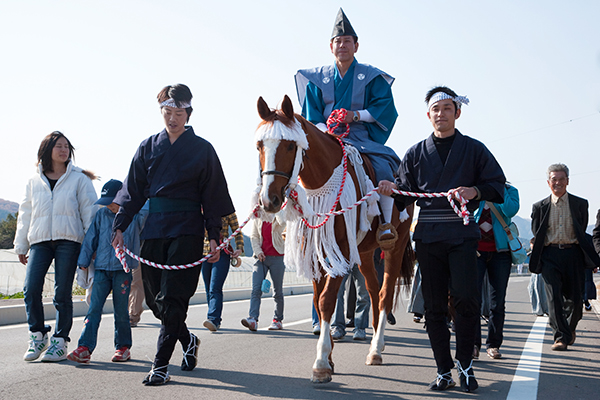 The procession of the samurai on horseback and the horse keepers.