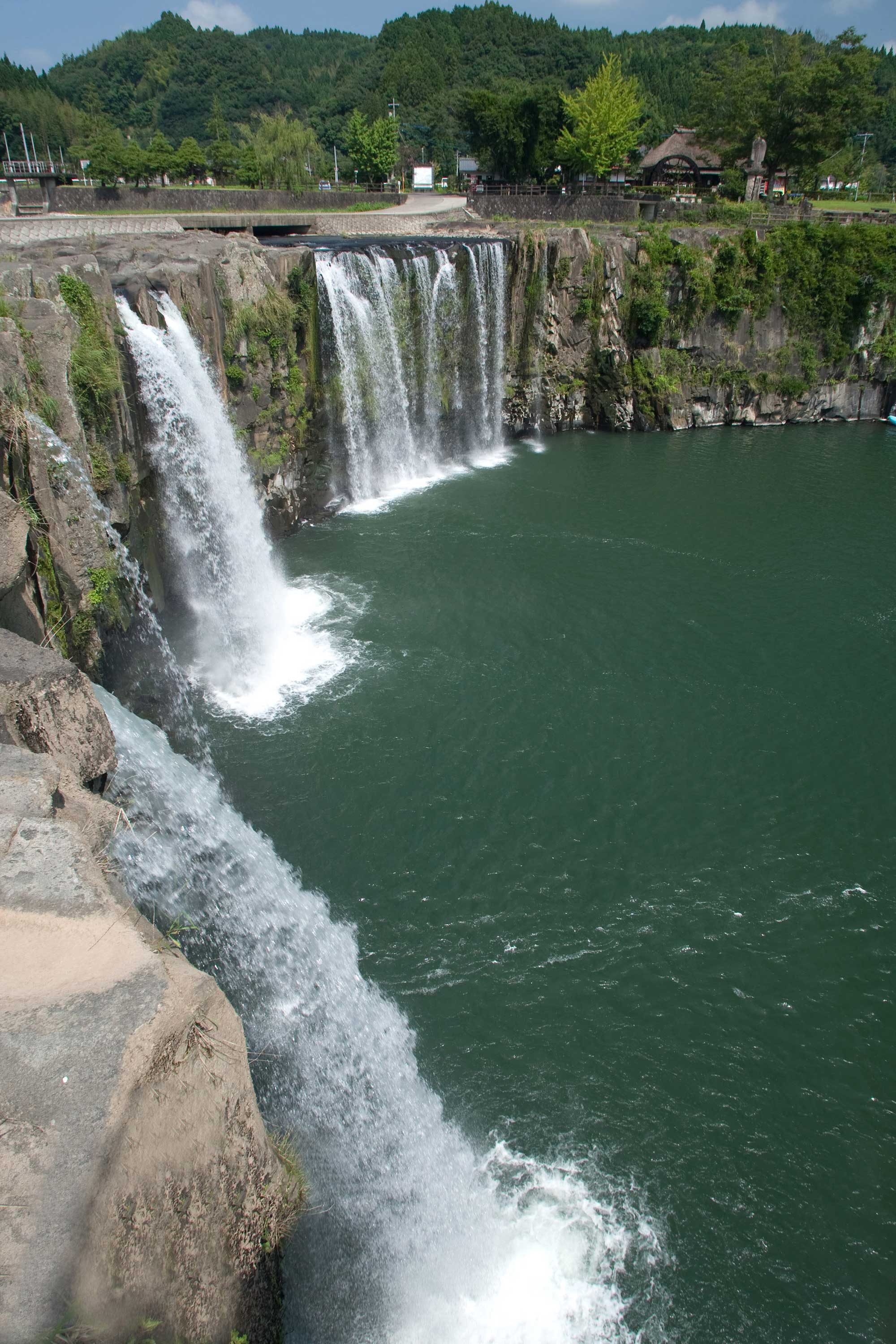 The central area of Ogata, Bungo Ono is called “Ogata Gosengoku (5,000 koku worth of rice field),” known for its rice cultivation. Harajiri Falls is located in the Ogata River, which flows in the middle of the long reversed S-shaped plain spreading wide in the east and west. The upstream is a flat riverbed with the bedrock exposed, while the downstream is a valley. A very dramatic change of the river is seen here.
While the Chinda Falls introduced earlier is nestled in the wilderness, the Harajiri Falls is easily accessible by a car. It seems almost unbelievable for a such magnificent waterfall to exist in the middle of the plain until you get closer.
You can look down the steep waterfall at your feet from the top, and it is also easy to approach the riverbank from below. The sightseeing boat visits the waterfall basin, and the suspension bridge overlooking the waterfall is swaying. It is an attractive tourist destination bustling with visitors throughout the seasons, with the exhibition area of “Michi no Eki,” retail shops for specialty goods, and restaurants.
The waterfall is about 20 meters high and 120 meters wide. It is characterized by its width just like the Chinda Falls and the mouth made of Aso lava draws a bow-shaped arc, thus it is nicknamed “Niagara Falls of Oita.” In the Bungo Kokushi (“Chorography of Bungo”), it is described as “the streak is like a reed screen, very sophisticated.” It has been selected as a “Top 100 Waterfalls of Japan.”
A water channel is drawn just above the waterfall. It is called Ogata Shimoiro, which irrigates the plain together with Kamiiro. They were channelized by the Oka clan, after the eruption of Mount Aso, drought, and pest problems jeopardized the village during the Edo period, creating the beautiful rice field of “Gosengoku.” The idyllic water wheel makes you smile.
Many events are held in the rice field surrounding the waterfall. In the spring, more than 500,000 tulips color the area around the waterfall, and there is the fantastic Kodai Himatsuri Festival with 13,000 lights swaying around in the summer. In the fall, the spectacular Kawagoshi Matsuri Festival is held, where a group of men in Fundoshi underwear crosses the water just above the mouth of the waterfall.
In addition, there is a place said to be the remains of a residence of the leader of the ancient Bungo Bushidan army, Koreyoshi Ogata, as well as making a road accessing East and West Magaibutsu (Buddhist Figures) of Miyasako. 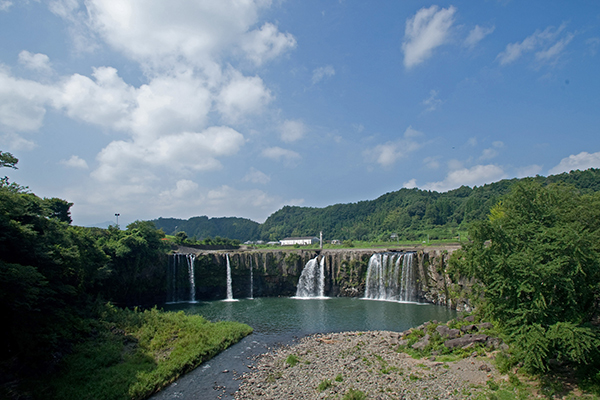 Many events are held around the waterfall, making it a tourist destination bustling with visitors throughout the seasons.